From its humble beginnings as a community college in 1954, Coastal Carolina University has come a long way in a relatively short time.

The Chanticleers, a nickname inspired by Chaucer’s Canterbury Tales, went undefeated in football in 2020, won the Sun Belt Conference, and earned the school’s first bowl bid. They lost, 37-34 to Liberty University in the Cure Bowl in Orlando, but Coastal still finished ranked 14th nationally with an 11-1 record.

While the football team enjoyed a breakout season, the most successful program has been the Coastal Carolina baseball team. The baseball program has consistently been the top performing program at the university in Conway, S.C.

The Chanticleers have won 18 conference titles and 16 conference tournament championships, including six straight from 2007-2012. Coastal also has earned 17 NCAA tournament berths since 1991.

Although the Chanticleers were dominating on the diamond, the baseball complex was far behind the competition. Charles Watson Stadium went through small renovations over the years, including a new wall in 2004, that proved to be made of an inferior material to vinyl sheet pile, which comprises the ChampionWall fencing system. ChampionWall is manufactured by CMI.

Following the 2012 season, Coastal’s baseball complex underwent a major renovation, which included the removal and replacement of the outfield wall. 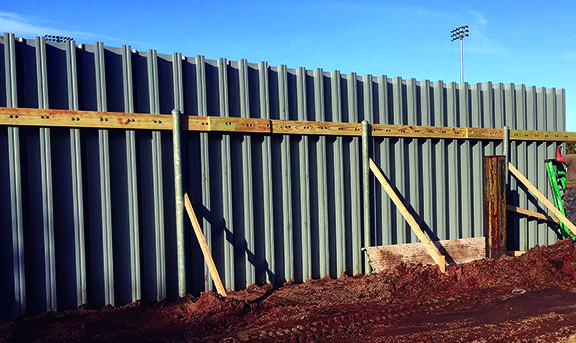 Custom Designs Marine Contracting, which had worked with CMI on previous projects, was hired to install the wall. There was a total of 203 sheets installed.

However, this project looked a little different than other ChampionWall installations. The typical colors for the viny sheets are Defender Blue, Challenger Green, which is the most popular, and Eliminator Gray. Coastal Carolina requested a color resembling the school’s colors of teal, black and bronze. CMI was able to come up with a matching dye and the first teal ChampionWall was installed.

Of the 203 sheets, 152 were shorter panels that measured 9-feet, 10 inches above the ground and 41 panels measured 20 feet from the ground and was used for the wall in center field. There also were 10 panels – five in left-center field and five in right-center field cut to link the two different heights of the wall. The panels were cut in two-foot, height differences to provide symmetry. 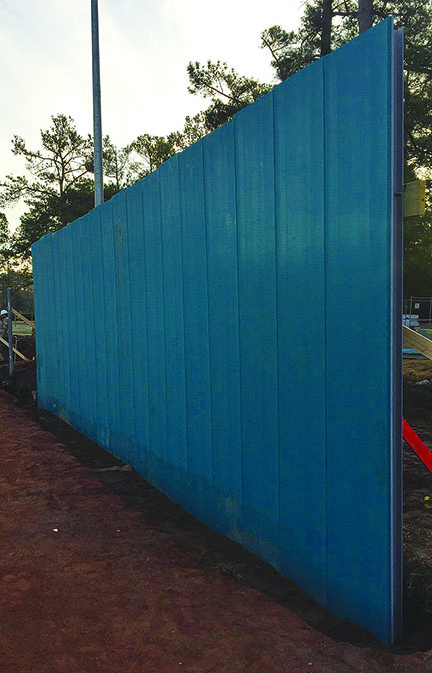 Renovations complete to Coastal’s Springs Brooks Stadium, the Chanticleers returned home after a two-year hiatus of playing in nearby Myrtle Beach’s TicketReturn.com Field at Pelicans Ballpark.

In front of a huge crowd and a newly installed CMI ChampionWall, Coastal blasted two home runs that rose above the ChampionWall to shut out Old Dominion, 4-0.

The next year, Coastal Carolina put the champion in ChampionWall, winning the Sun Belt regular season and tournament, hosting an NCAA region, winning the school’s first Super Regional in Baton Rouge by beating LSU to advance to its first College World Series in Omaha, Neb.

The Chanticleers faced three elimination games during their run to the championship series against Arizona. Coastal also lost the opener of a best-of-three championship series. Not to be deterred, Coastal defeated the Wildcats, 5-4 to force a winner-take all finale.

In the showdown, Coastal took advantage of two Arizona errors to score two runs and edged the Wildcats, 4-3, claiming the school’s first national championship and tying a record for wins in a season with 55.

Was it the installation of the ChampionWall? Who is to say, but the national championship banner looks good on the teal ChampionWall at Springs Brooks Stadium.

Contact CMI’s Trevor Edwards at tedwards@cmilc.com or call 404-915-1138 for more information regarding ChampionWall.

Ready to start your project?